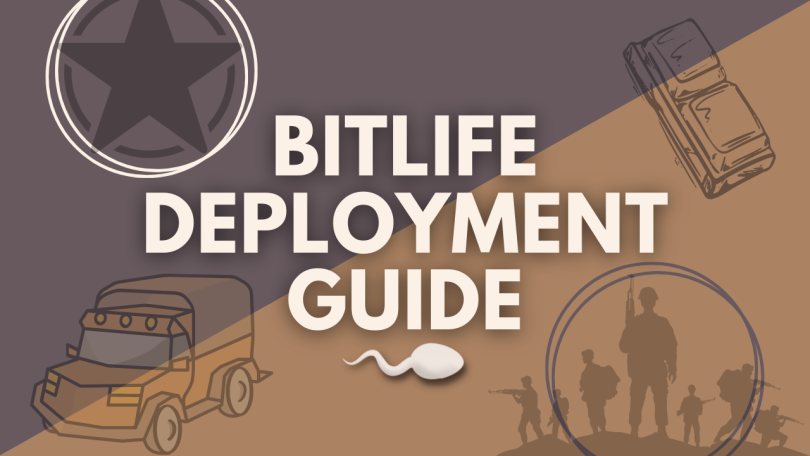 When you join the military in Bitlife, your commanding officer may order you to deploy to a hostile territory within a country. If you agree to go, you will get a pop-up of the minesweeper game. You have to clear the minefield without detonating any bombs. If you select a box with a bomb, you may get severely injured or die from it. Neither of these options is desirable. If you’re struggling with the deployment game, this guide will walk you through how to clear a minefield.

How To Join The Military

To get deployment missions, you need to join the military. When you create your character, age up, and stay away from the police till you graduate high school, you will get the option to apply to University, enlist in the military, look for a job, or take some time off. In some countries, you won’t get this option until you turn 18. To enlist in the military, select the branch you would like to join. There are five military branches which are; the army, air force, navy, marines, and coast guard.

When you select any branch, you may enlist or apply as an officer. You only need high school qualifications to enlist in the military. To become an officer, you must have completed four years in the university with a degree in any major.

How To Get Deployed

After joining the military, you will get random pop-ups when you age up, such as promotions, colleague drama, work scenarios, deployment, etc. When you get the deployment pop-up, you may agree or refuse to go. Refusing to go is futile because your commanding officer may berate and force you to go on the mission. Whichever option you select will display the minesweeper mini-game. Below the screen, there is an option to desert your post. However, this option will automatically remove you from the military.

Note: Clear the squares that don’t have mines and flag the ones that do! The number in a square indicates how many mines that square is touching, including corners.

There is a large box with small squares in it. Each square contains an open space, a number, or a bomb (mine). To clear the mine, you have to determine which square is a mine and flag it. Flagging a mine will help you avoid it.

In each game, the total number of mines in the square is above the box. You may get as low as three mines or as high as 16 mines. The number of mines indicated is the number of flags you will get. Thus, you have to flag the mines correctly. Detonating a bomb may kill or severely injure your character.

To start the game, select anywhere in the box. Your first choice will never be a bomb. After choosing a square, some squares in the box will open, and you will see different numbers, such as 1, 2, 3, etc. Beside each number, you will find one or more unopened squares. A number in a square indicates how many mines the number is touching. For instance, a square that has the number 1 in it implies that the square is touching only one mine. It is up to you to figure out which box contains the mine.

Once you make your first move, begin with the squares with the number 1 beside them.

In the upper right corner, there are three squares. One is flagged while two aren’t. The number 1 circled in the screenshot below is attached to only two squares, the flagged square and the one beside it (the number in a square indicates how many mines that square is touching). Since the number 1 predicts that it is touching one mine and the mine is flagged already, it means the other box is not a mine. The next thing to do is to open the box that is not a mine.

After opening the box, it revealed the number 2, which means it is touching two mines. Since there are only two squares in the upper left corner, the second square is a mine.

In the lower right corner, the number beside the flagged mine is touching only two squares. Since one of the squares is a mine, the other one can’t be a mine.

Opening the other box revealed the number 2, which indicates it is touching two mines. However, there are only two squares beside this number. Thus, the second square is a mine.

In the right-hand corner, beside the flagged box is the number 1. This digit is only touching two squares implying that the other square is not a mine.

Moving sideways, the digit above the flagged mine is 2. This digit is attached to two boxes. Therefore, the second box is a mine.

The digit diagonal to the flagged mine is also 2. However, two mines are flagged already, indicating that the third box is not a mine.

After opening the box, it revealed the digit 3. It is difficult to determine which of the squares around it are mines. Above this digit is the number 2. This number is touching only two boxes. Thus, the second one is a mine.

Moving downwards, the number 2 below the flagged mine indicates it is touching two mines. However, the two mines have been flagged, which means the squares surrounding this digit are not mines.

The box revealed the number 2. The two mines are also flagged. Thus, the surrounding squares are not mines.

The next digit is 3, which means this number is bound to three mines. It is also connected to only three boxes, indicating that all three are mines.

In the lower-left corner, the number 1 is touching one square. Thus, this square is the mine.

Moving sideways, the number 2 is in contact with four squares, and two are flagged. In this case, the remaining two boxes do not contain mines. Opening both boxes will complete the deployment. Also, above the large box, the mines flagged is 10/10. Therefore, all the mines are flagged.