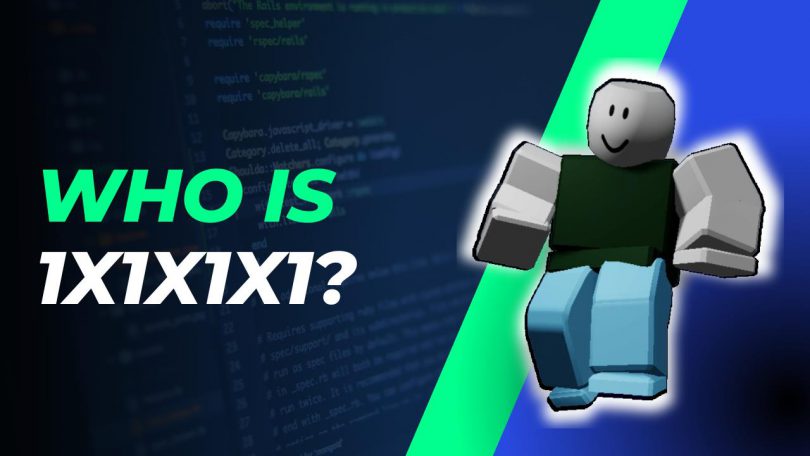 Roblox is known for its insane amount of experiences and user base. Do you know what happens when there’s a large player base? A huge community is naturally formed, and with communities come many things, say ghosts, for example. By ghosts, we mean urban myths and other popularized stories.

They could be a figment of some player’s rich and creative imagination. It could also be something that was created entirely unintentionally, such that the person responsible for the urban myth might not even know that they started it. Or could it be something real? Something roaming in the shadows of our waking world?

Some myths from Roblox have already been debunked, but some are still a mystery and haunt the players. In this article, we shall discuss one such Roblox Myth. Or was it a figure? Guess you will only know after reading this article.

1x1x1x1 is very much synonymous with a hacker among various Roblox users and groups. So many rumors have intrigued the players for quite some time. Any hacking activity was associated with 1x1x1x1. This ensured that 1x1x1x1 often became the topic of focus for many. A lot of users claim they were hacked by 1x1x1x1, and there are YouTube channels that claim 1x1x1x1 is back, while some pin hacking activities on 1x1x1x1.

But what is the truth? Was 1x1x1x1 a notorious hacker? Is 1x1x1x1 still around? Is 1x1x1x1 responsible for the hacking incidents on Roblox as a lot of players and YouTubers claim? The answer to all these questions lies in the next section.

1x1x1x1 The Origin and the End

1x1x1x1 has long been debunked, thanks to a former Roblox admin. But how did it all start? 1x1x1x1 was a part of Roblox’s backstories which were created by Shedletsky, formerly known as Telamon. He is a popular Roblox user who also worked as the creative director of Roblox at a point in time.

1x1x1x1 came into existence when Telamon posted a bunch of Roblox backstories to the news. In one of those stories, he mentions 2×2, the first brick. This brick was supposedly copied over and over hence leading to the creation of every other brick. In a footnote there, he mentions the evil 1x1x1x1. So, that’s the origin story, at least a part of it.

The rest of the origin story debunks it, all of this was posted by a former Roblox admin named MrDoomBringer. There was a person who demonstrated an exploit to MrDoomBringer and also told him how he did it. This exploit made heads rain that was saying something along the lines of “He’s coming back,” and “1x1x1x1 is coming for you” MrDoomBringer reported the exploit to the devs. But he was not the only one on that server at that time, the rest of the players were freaked out, and that was also how the 1x1x1x1 hacker rumor started.

So, yeah, a random story and an event created this Roblox myth. For the player’s information, the 1x1x1x1 user’s account is currently terminated.