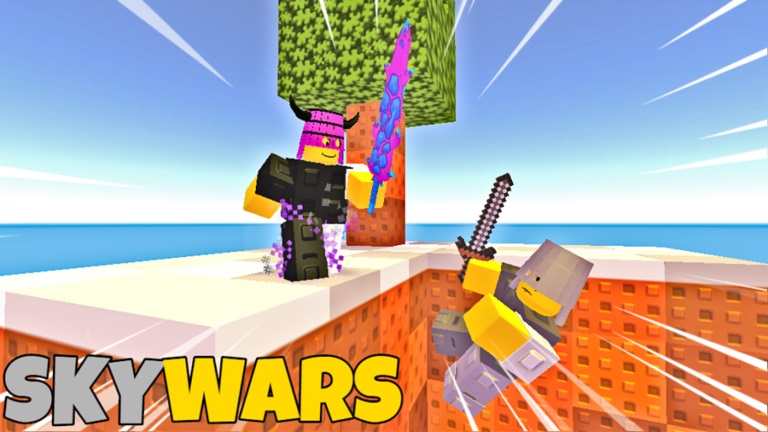 Roblox Skywars is the new series of fighting games built by 16bitplay Games based on the SkyWars game mode in the Hypixel Minecraft server for all the people who perceive themselves as idols.

At the beginning of the game, Players spawn with a bow, sword, pickaxe, and blocks on different islands, and everyone has to kill each other before the timer ends. The last player alive wins the round. Players that are alive when the timer ends also win the round.

These Blocks are mainly used for bridges, barricades, and other advantages enjoyed by the player. More blocks can be obtained by mining with your pickaxe. They can be mined for coins that can be used in the shop.

In the Skywars Roblox game, players have to build their bases and destroy the bases of others to conquer the sky. While destroying the base of others, you also have to protect your own base, for which you will need powerful weapons, and Roblox Skywars Codes can help you to get them for free within the game.

A shop in the lobby is where players can purchase armor, weapons, blocks, and power-ups.

The Roblox Skywars codes are very useful for the players as the codes in the Skywars game will provide you with various kinds of skins, potions, and many other rewards. The game also offers various codes to redeem, which can be used to score more and get a higher rank in the game.

Following are some of the codes that are mostly used by a number of players in Roblox Skywars:

How To Redeem Roblox Skywars Codes?

There is a process that players need to go through to redeem and claim their working and activated Roblox Skywars codes and earn their credits which is very easy and convenient.

To redeem the codes you need to follow the simple steps given below:-

Remember that the skins aren’t permanent, so you’ll have to re-enter the code to put it on again.