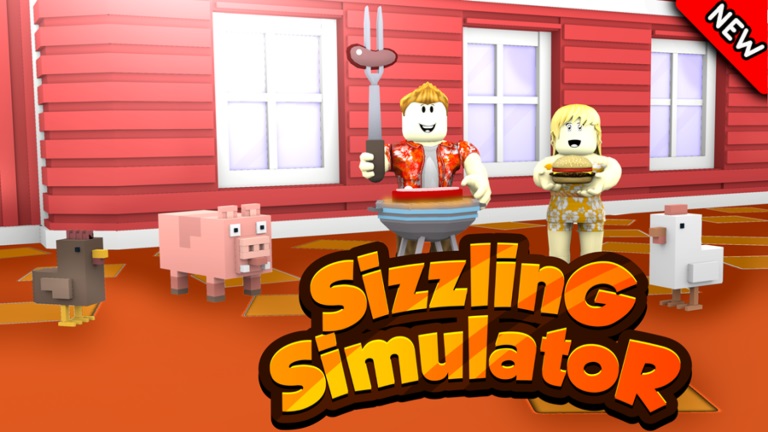 Roblox Sizzling simulator is sort of a cooking simulator game with more added elements. The player starts with a huge fork, with which they have to hunt animals, chicken for starters.

Hunting animals gives the player meat; this meat can be cooked at a sizzler. After Sizzling the meat, it can be sold for coins. Coins randomly spawn around on the map too. Coins can be used to buy better weapons and forks. Upgrading weapons enable the player to hunt faster, while upgrading forks increase their meat carrying capacity. Pets can also be bought for coins; pets grant the player a multiplier for the currencies and the damage. Even the grills can be upgraded to increase their efficiency.

Hunting animals also grants the player exp, coins, and meat. Leveling you rewards the player with gems. Gems are another type of currency in the game, other than coins.

Referring to friends can reward the player with a lot of benefits; for one referral, they get 1000 coins; for five, they get 500 gems, and so on; at 250 referrals, they get an extraordinary Rainbow Snail pet.

After hitting level 10, the boss zone is unlocked, where the player can find a boss with an insane amount of hit points. Killing it will yield items; these items can be used at Trader Troy, which can be found in the boss room. Hats can be crafted using boss drops or material. The rarities range from legendary, godly, mythical, and exceptional.

The codes in Sizzling Simulator can get the player coins, pets, and even gems. All of these play an important part in the player’s progression. With the benefits the player receives from redeeming the active codes, they can easily buy the best equipment available at the initial map and get to level ten.

How To Redeem Sizzling Simulator Codes?

Sit back and follow the steps; you will have redeemed your codes in Sizzling Simulator at the end of this ride.

To redeem the codes in Sizzling Simulator, follow the steps below: –