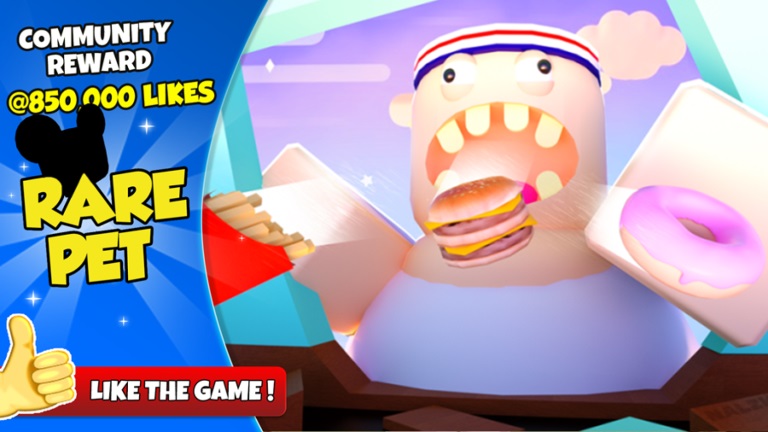 Listed below are the currently active codes in Eating Simulator:

The player starts with french fries; equipping it and clicking allows the player to eat them. And eating makes the player fatter and larger. There’s a food counter which fills up when the player eats; when the max food limit is hit, the player gets a choice to either sell the food or upgrade their DNA. Selling food gives players coins; they can be used to buy better food like Blueberry pie, Apple pie, and Grapes, to name a few. These increase the food count faster with every click. Upgrading DNA increases the food count, and a game pass takes the limit to infinite. Game passes take pay to win to the next level; there’s even an auto clicker that clicks for you while you just AFK. Other than eating, the player can attack too.

The game has a Ranks shop; buying new Ranks and equipping them gives bonus damage, HP, speed multiplier, and gain. Ranks are like a Rebirth mechanic; the player’s food and other stats are reset in exchange for the multipliers.

Players can buy pets that come with a multiplier, and they have rarities too. Six pets can be equipped at a time. There’s a feature allowing trading with other players too. After growing to a certain size, the player can leave the beginner area and move to other areas where they can find better pets.

The codes in Eating Simulator are very generous; they reward the player with a decent amount of coins, food, and pets of varying rarities. All of these give the player a major boost in their quest to become the Fattest.

How To Redeem Eating Simulator Codes?

To redeem the codes successfully, the player must follow the instructions given below.

To redeem the codes in the game, follows the steps below: