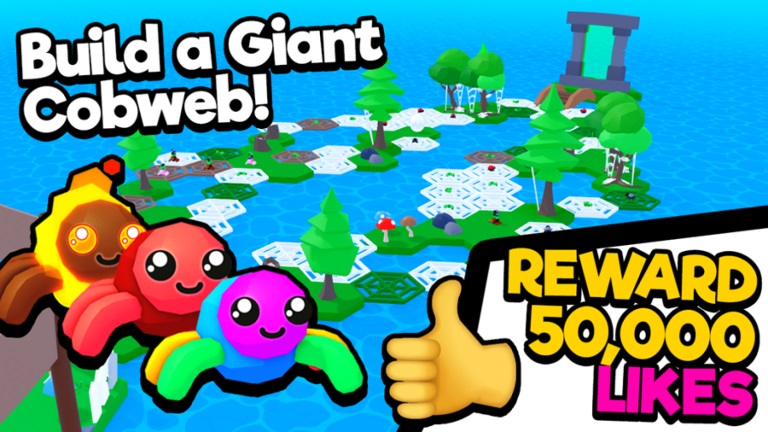 Roblox Be a Spider! Tycoon codes are listed below:-

Be a Spider Tycoon Codes (Expired):-

Roblox Be a Spider! Tycoon is a unique game. In this game, the player can roleplay along with their friends as a spider, spin around the map weaving cobwebs, and collect spider pets to help them in their quest.

When the player first spawns into the game, they will be met by their distorted avatar. The player’s body is gone; all that remains is the head, and to the head is attached the body of an arachnid, a spider, to be specific.

The player is assigned a place as their home on an island. They start with a certain amount of web; the web is a currency. Web can be used to unlock tiles; when a tile is unlocked, it can contain either a cobweb, a tree, rocks or some other terrain, or an egg.

A cobweb catches insects; these insects can be collected by crawling to them; this will put the insect on the player’s back; they can keep stacking insects on their back or go back to the lobby where there’s a selling zone. In the Selling zone, the player can sell their collected insects on the web. With this web, they can again unlock more tiles, and the cycle repeats.

The eggs the player encounters while unlocking tiles can be hatched by spending a certain amount of web; the hatched egg grants a spider pet of a random rarity. These pet spiders collect the insects on the cobwebs for the player and sell them. They can do the hard work while the player can chill.

Benefits Of Using Be a Spider! Tycoon Codes

Initially, in Be a Spider! Tycoon, the player has to spend some time spinning cobwebs to trap insects and unlock more tiles. But with the help of codes, the player can get that initial jumpstart which can help them get immersed into the game quickly.

How To Redeem Be a Spider! Tycoon Codes?

Follow the steps listed below to redeem the codes in Be a Spider! Tycoon: –

For the newest game updates, follow the game developer on Twitter. For the game codes, check out the game’s group on the game page of Be a Spider! Tycoon on the Roblox website.