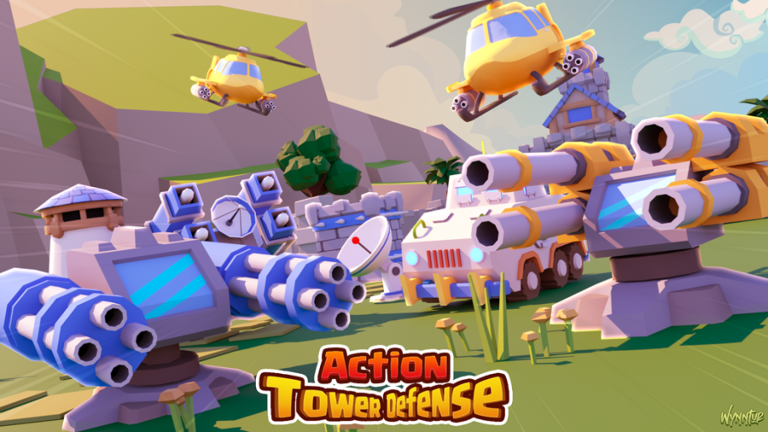 Roblox Action Tower Defense is a tower defense game where the player has to defend their castle from waves of persistent mobs.

The player starts in the lobby with 30 gems and three other tower types, Archer tower, Barricade, and Catapult. And they have two slots for towers unlocked; four more slots can be unlocked as they hit particular levels. They also have a skill called Quick fix unlocked, which restores the HP of towers around the player.

Usually, the player in tower defense games is passive other than deploying or upgrading towers. This game has skills and weapons too. Weapons allow the player to attack the enemy with their equipped weapons directly.

There are three game modes, A story mode, challenge mode, and endless mode. The player builds towers and defends their castle; if the mobs completely deplete the castle’s HP, then it is game over. The player has HP too, if they die, they respawn after a few seconds with low health.

They can restore their health to the max at the fountain in front of the castle. If the towers are destroyed, they have to be rebuilt. To make them more powerful, they can be upgraded with logs. Logs are needed to build and upgrade towers.

Logs can be gained by killing the mobs; the player starts with a set number of logs at the beginning of a match. After a certain number of waves, the boss spawns, and the boss has higher hit points; killing it will win the match for the player.

The progression in Action tower defense is medium-paced. Using the codes, get the player gems and coins; both are extremely in progress. The player can summon new towers, skills, and materials with gems and coins. They could summon a very powerful and rare tower, skill, or material if they were lucky enough. These can help them progress quickly and easily in the story mode.

The steps to redeem codes in Action tower defense are not too complicated as long as you stick to the instructions provided.

Follow the steps below to redeem the codes in Action Tower Defense:

Follow @infcanvas on Twitter for the latest game updates; check out the Action Tower Defense game page on the Roblox site for the game codes.