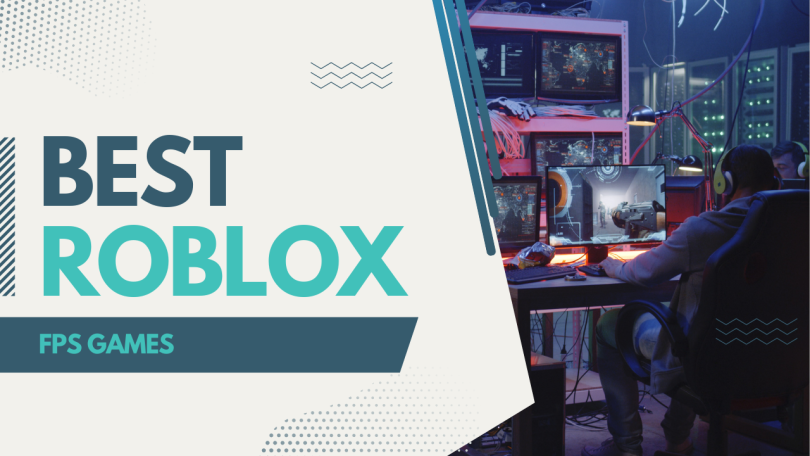 Roblox is a platform for online gaming and a tool for game development created by the Roblox Corporation that enables users to create games and play those made by others.

Roblox is a free game with in-game purchases, available through the game’s virtual currency known as Robux.

The Roblox creators’ community is impressive. It’s no surprise that they’ve created a number of different FPS games, given their ability to create some truly magnificent and addictive games. Roblox’s collection of FPS offerings ranges from clones of popular games to completely unique experiences.

Roblox Bad Business is a polished and well-designed FPS game. This game has a deep character customization system and gameplay, which enables the players to that this is a team-based FPS game on Roblox.

Big Paintball is a nearly faithful recreation of the classic outdoor sport. This bright and relaxing game can be played with both friends and strangers. The bright colors create a relaxed atmosphere that will have you focusing on enjoyment rather than l33t skills.

Roblox Counter-Blox takes on the popular esports weapons and most popular bomb-defusing and hostage-rescue maps. If the players are well versed in aiming and shooting, this game is perfect for showing off their skills.

This is not just an ordinary FPS game that only needs killing; the players must do a lot more than just killing. The players must build the greatest base and amuse their opponents with their enormous weapons and military vehicles.

Roblox Phantom Forces are one of the most popular Roblox FPS games. It has an insanely large number of guns, allowing the players to create an insane number of loadouts. The players can also select a character with a skill set that matches their playstyle.

Zombie Uprising is all about teaming together with up to four friends to take on the undead. The more zombie waves the players clear, the more difficult the hordes become. If they defeat enough of them, they’ll be pitted against insanely tough bosses who will make the players’ hearts race.

Roblox RBB! Island Royale is open-map scavenging for weapons gameplay and similar build mechanisms that make it nearly identical to its inspiration.

Roblox The Wild West is an action-packed western roleplaying game. The players can create chaos by robbing the bank, taking treasures off the Bronze City train, or murdering helpless passersby to get their hands on their hard-earned loot! As a Sheriff, the players can work for the law and hunt people for their rewards! Or even they can serve the mayor as a law-abiding citizen by mining or taking part in hunting. In the Wild West, everything is possible!

They can also go on various covert operations.

Roblox Arsenal is the most chill game on the app. Apart from guns, the players can find other weapons like blunt and bladed tools.

Call of Roblox is a campaign-based game that has impressive animations and textures one can ever see in Roblox.

Impulse is a seriously underrated game that everyone should play because it has some outstanding refinement in both its presentation and animations.

Roblox Strucid is a first-player shooting game that was developed as a combination of Island Royale and Fortnite.

This shooting game enables the players to fight with their friends and enemies through their fun building mechanics. This game can be played on both pc and mobile.

Roblox War Simulator takes the players back in time. With simple weapons, the players first progress through earlier eras until they reach the “Future.” They can employ several tiers of weapons from each era to eliminate waves of AI warriors.

These are the top 15 Roblox FPS games in 2022 that are more exciting and give a real-life-like experience for the players. Gear up the ROBLOX app and experience a near-death gaming experience.